Today (Wednesday 25) was the day for pre-conference workshops with a limited number of participants, and I signed up for this one a long time in advance. There seems to be a shared need in academic libraries everywhere for more information literacy / library instruction, and an equally shared lack of resources to perform said instruction.

At NIU, even though they had increased student information literacy classes by 50%, a survey showed that students were still unable to find the material and sources they needed. The library applied for, and received, a grant that enabled them to develop nine animated videos produced by an external animation company, as well as to create supplemental video tutorials that were made in-house.

Michelle Guittar, Molly Mansfield, James Rosenzweig, and Kimberley Shotick (all from Northern Illinois University), and Mackenzie Salisbury (Georgia O’Keeffe’s Museum Research Center), hosted the three-hour pre-conference, and the four main sections of the workshop were: 1. how to plan / research a video tutorial project, 2. “how to create conceptual videos  through collaboration”, 3. how to create instructional videos using free software such as Screencast-o-Matic, Jing, and Camtasia, and 4. how to use analytics to assess the use of these tutorials.

There were some interesting lessons to learn from the project at NIU. The survey they conducted before starting to make the tutorials showed that:

According to the NIU librarians, two categories of video tutorials are needed: One that deals with more conceptual material and can be used over time, without having to be updated whenever there is a change in a database  or user interface (e.g. the difference between a public library and an academic library), and one that deals precisely with how to use the resources and that can be changed and updated when needed.

Through their work with both the animated videos and the self-made video tutorials, the group had come up with the following “Best Practices for Creating Online Tutorials” (I have paraphrased some of them):

There is also budget and time constraints to consider: for animated explainer videos (made in collaboration with professional animators etc), they estimated a 4-8 week production process, while simple video tutorials made by librarians themselves can be made for very little money and in a comparatively short time. (Nothing really new there).

The NIU tutorials are all uploaded to YouTube, and can be embedded in the relevant library web-pages etc. YouTube is owned by Google and can therefore make use of Google analytics. This is useful to see how many times a video has been viewed, but also to see which websites the viewers come from and where they go after viewing the video.

I have to stop there, too tired to make much sense. More later.

Conference rooms are dreary, even in Portland:

I think I learned as much from these guys as from the workshop, and that’s the whole point of going to a conference.

The love that dare not speak its name

This makes my heart leap: The holy grail of independent booksellers, Powell’s City of Books:

It doesn’t look like much, but this bookstore covers a full city block. More than one million used and new books meticulously arranged, nine colour-coded rooms with 3500 different sections, a rare book room , coffee shop, author events and art exhibits.

Being a “book lover” has for some reason become synonymous with  being old-fashioned and resistant to change. There is a certain irony in this. Books are agents of change, no matter what format they are in. I love books because I love to learn, and a certain misanthropic personality trait is tempered by the love of experiencing the world filtered through other people’s minds – expressed in books. Also: there is no democracy without dissemination of knowledge. Embrace it in all forms and formats. 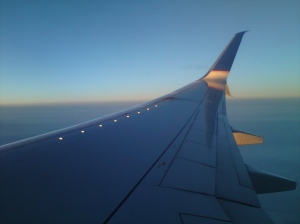 We left Gardermoen 08:00 Monday morning, bright-eyed and bushy tailed, and arrived at our hotel in Portland 25 hours later, about ready for the morgue. The eight hour flight to NY went fine.

The four hours at Newark airport were fine too. Of course, having to go through immigration, pick up our bags, stand in line for customs, transit to another terminal, recheck our bags and go through another security checkpoint was tiring, but there are ways to handle stress: 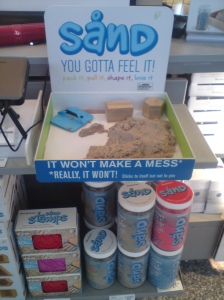 Sånd! No, not sand, Sånd. Well, actually, it is sand. But expensive! In tiny boxes! Apparently, if you “pull it, shape it, love it” it will relieve you of stress and anxiety. And “It won’t make a mess. Really, it won’t!”

For no apparent reason, me being a little ol’ lady and all, I was singled out for extra close inspection twice. First I was nearly tickled to death by an overly conscientious security officer in Oslo, then at Newark something suspicious in my carry-on caused a little commotion. I still don’t know what it was, but rubber gloves and a long stick was involved in the inspection. (Of my backpack, not of me!!)

The final United Airlines flight to Portland was bad beyond words. But we managed to crawl onto the train and off again downtown Portland, it was late, it was dark and it was raining as we dragged ourselves the last few blocks to the hotel. I had booked a small room for myself when I first decided to go, and then when my husband finally decided to tag along a couple of weeks ago I emailed them to ask for an upgrade. (Paid for privately I hasten to add). And boy did they upgrade. 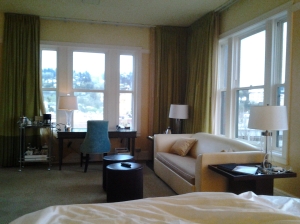 There’s a walk-in closet about the size of the rooms I usually stay in for a conference.

I generally try to stay clear of hotels recommended by conference organizers since they are often large, generic chain hotels, and in this instance quite expensive, so I was scouring ebookers for a bargain on a smaller hotel, in reasonable distance from the convention center. I like older hotels, even when they are a bit worse for wear, and if they are named something like “Grand”, “Majestic”, “Superior” or  “Royal”, they are almost invariably a bit smelly but interesting. So I chose Hotel deLuxe, which turned out to be quite and utterly lovely. We slept.